July 16, 2014
The best part of growing up in Cleveland Heights,Ohio is all the amazingly talented people you meet. From writers,actors,rappers we have so much talented in such a small diverse city. And me being the loving individual,Im going to let you know about all of them...


10 people to watch out for,that are from Cleveland Heights.

1.   Niesha Davis a writer,and actress currently teaching English in ROK. She has created a web series based loosely on her life,career,and dating abroad. For more information check out her site and intro video here

2.Ski Mask Malley a rapper hailing from the Heights who adds diversity the Cleveland music scene. He has had a few successful mixtapes and his latest video, Apt 5a already has 166,028 views on Trill HD. You can view Apt 5a HERE

3. I have had the pleasure of being in the presence  of rapper-producer, Darren Anthony of the daily and watched his talent grow over the years. Anthony released his first mixtape in 2009, 'The Restaurant'  and I still play it to this day.

4- You may know him as the star of , 'That Guy' , I however know him as high school classmate and class clown, Jeremy McBryde. After relocating to California, he has already been on 4 different series. 'That Guy' just wrapped season 2 and preparing for season 3.

5- One of the Heights finest has lived around the corner from me almost my entire life, Renard better known as Nard Dibi. You can listen to his latest song from upcoming mixtape,  here .Self proclaimed 'underground King' already has a few videos and songs worth listening to.

6-Growing up Jimmy Hu$tle was like a kid brother to me,who knew he was gonna be one of the dopest rappers of the mid-west AND west coast. New song, 'All I know' was released earlier this week and is fire. Listen to 'All I know' and his other songs here

7- As kids,I  thought SoEz would have been a basketball star,not accomplished rapper or producer..... Glad I didn't bet on it,lol. To hear his songs,including his 'Og Bobby Johnson' freestyle click here

8-Singer,Conductor,Composer Adrian Dunn has been touring with one of the hottest tickets to come to Cleveland,Chicago,and NYC, Hopera. A combination of hip-hop and opera created by Dunn. Be sure to get your Hopera tickets HERE

9- Then of course there is Antonine Dunn,an up and coming singer. If nothing else is in those Dunn genes,I know talent is! Such a loving and humble spirit has been seen opening for a few of your favorite r&b singers. For more information on Dunn and his music click HERE 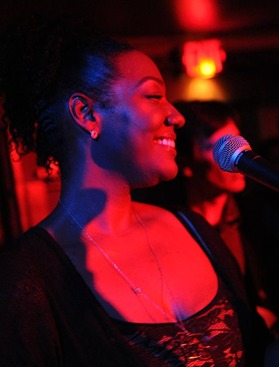 10-Now with one,I'm slightly biased but she is still amazingly talented. Gwen Maul is embodies so much depth and soul in her music,its almost addicting....


Ironically most of the people on this list, are products of the Cleveland Heights School district music program,if this isn't proof that tax dollars are hard at work,well I really don't know what is.

Fashion cues for the Attractive and Mature....

August 29, 2009
For some reason everyone wants to claim to be 'grown and sexy'.....And for some reason cant dress the part... So Ive created my own phrase "this isnt for the grown and sexy,this is for the mature and attractive"....On the strength that those of us who actually are 'grown and sex' do not have to remind those around us EVERY 5 MINS or attend events named after this fad saying.....Attractive and mature have the form of dress that states it. So take these few helpful hints.... 1-Ladies;your jewelry needs to be simple and functional.A few simple pieces (not made of PLASTIC or from the hair store) say alot ....Perfect examples are.... a cocktail ring a silver 'return to Tiffany&co' bracelet or just something lite to put around your wrist a pearl necklace;classic AND sexy. a plain gold hoops <==NO,i repeat NO doorknockers a pearl earrings 2-Step your shoe game up,purchase a good CLASS pair of shoes What is a good pair of shoes you ask?A good pair of
3 comments
Read more