In loving memory of Michael Jackson.... 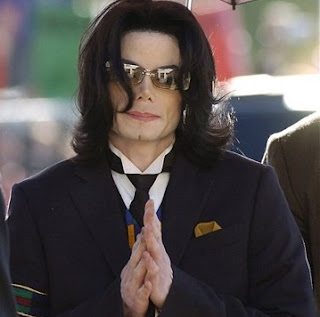 Michael Joseph Jackson
August 29, 1958 – June 25, 2009
After spending this past weekend in NYC,I remembered that the first time I went to NYC,Michael and Lisa Marie got married.When I was walking past the Trump towers(I believe) he was saying 'I do'......

I feel like part of my childhood is gone.

He was the man.Even the hardest of the thugs and criminals cant help but to want to moonwalk and grab their crotch when they hear the melody of a MJ tune......He was influental in the way we live our lives,dance,and music we listen to.He is a pop icon, and music royalty....no matter how damn weird he is.

Ill be the first to admit a grown man who lives with a chimp,and Emmanual Lewis,climbs trees and keeps girafs as pets is weird.....But the man scarficed his sanity,health,his and childrens lives to share his gift with the world.

I personally think he is better off gone.
Sound horrible?
Well think about it like this...
When a man is living on life support,and the family pulls the plug,because he lacked a qaulity of life,it is justified.

When Michael is walkin into courthouses (the days he could walk)in blazers and pj pants,can barely talk,sleeps all day,doesnt move from his house,sounds like he lacked a quality of life?

There comes a point when the fame,fortune,and fans become TOO MUCH.
Last thursday he reached that point.
The man risked his health at any every cost to give fans a show,getting burned doing commericals,practicing physical routines that no 50year old man has NO business doing...
He reached his point.
So the world thanks him by draging his name through any and everything?
How painful is it for his kids to read in the paper that they may not belong to their daddy?
Congrats to CNN/TMZ/STAR....you made a 8year old cry.

Its horrible that he is gone...
The world lost an entertainer...
A family lost a father,brother,son,uncle...
It horrible that a mother has lost her son,and a little sister has lost her big brother,trust me,I know first hand how bad that hurts......Its even worse that 3kids dont have a father(or a mother that isnt a money grubbing piece of PWT for that matter).

RestInPeace
To the man who inspired us to make a change,and look at the man in the mirror.

March 23, 2020
This is the story of how my life was changed (again) in a matter of a few months... Its taken a while to process everything that has happened in my healing, the journey and ultimately what is next for me ... So bare with me as I tell this LONG story, Ill include pictures though to make it kinda fun...I have dealt with a lot of depression and anxiety stemming from this entire situation because of things that went wrong, things that were left unattended (by my own hand) and ultimate outcome...But I want to share my story because I know that someone else is hurting in silence and could use some help. While I don't have all the answers ,or maybe any some days, I have my story On February 19th at 12:30pm, I had 19cm/ 3.06 pound fibroid and 8+ pounds of excess skin removed in the same 6 hour long procedure.... Days later I had to have 2 blood transfusions due to the loss of blood in surgery and after.  Apparently things got scary (I didn’t know,I had a TON of morphine in my sy
2 comments
Read more

May 26, 2020
And just like that.... I had a date. The scramble began, I had to cram 6-8 weeks of recovery plans in a matter of 10 days.... Oh, and  I mention this is my final semester of my degree? So yea on top of working full time, trying to navigate through my interpersonal relationships,  and processing whatever is about to happen, I had to navigate what this could possibly look like for the last of my education. via GIPHY I was extremely emotional at this point and probably closer to my breaking point that what I honestly wanted to admit.......... I was scared. Scared of the pain, the recovery, the incision, hell how my body would look and feel because I had honestly just adjusted to the initial weight loss and of course dying. While both procedures are fairly simple, its rare that they are done together....So I had no clue what to expect but that I was going to be in pain... I got my tribe together for surgery/recovery plans, bought plenty of wine (they like
Post a Comment
Read more